With lots of kids attending the launch of The Last Viking Returns on 10 September 2014
I decided to get creative. Book launches can be notoriously dull, especially when author and illustrator speeches consist mostly of thanking everyone who gave birth to them or helped create the book or once said something kind about them scribbling as a kid that set them on this magical path.   And this list can go on and on and on and – ‘Oops, sorry, was I snoring?’

On a pivotal page in The Last Viking Returns our hero, little Knut, hits a fairground test-your-strength striker at Viking World causing the bell to soar towards Asgard, home of the Norse gods. My wife Jan suggested we have a striker for the launch because kids love whacking stuff. So in a fit of Vik 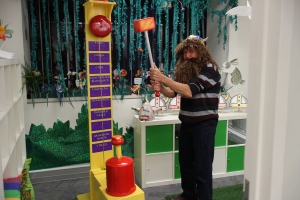 ing madness I decided to try to make one. For a design I trawled Google like a teenager doing a school assignment and, eventually, after the usual teenage distractions, I found a plan, would you believe, in a 1935 edition of Popular Mechanics magazine. Isn’t it amazing that the only reference to building one was 80 years ago?

My construction technique was trial and error, and boy, did I error – over and over. Anyway, I persevered against all sense. If you can make a striker after looking at my photos below, then I will be mightily impressed.

The striker was a huge success. The kids at the launch banged the living daylights out of it using Thor’s hammer. After it was smashed they kept on hitting it. Shades of Viking berserker rage perhaps? It now sits sad and forlorn in my studio awaiting repairs.